Abdelhameed Sharara, is the founder and CEO of  RiseUp; the Middle East and  Africa’s top and biggest entrepreneurship summit with around 5000 attendees from 52 countries.

Before founding RiseUp with his co-founders and the whole startup ecosystem in the GrEEK Campus in November 2013, Abdelhameed worked at Injaz-Egypt where he helped creating the first startups’ pipeline in all Junior Achievement countries worldwide. The program design was awarded the “MetLife foundation award for the most outstanding award in all JA countries.

Sharara had also worked as an English conversation and soft-skills trainer at Dale Carnegie and Berlitz, and was the co-founder and business development manager of Adams, a soft skills and training company. He graduated from Ain Shams University’s Faculty of Law (English Section) he was the founder of Ain Shams Model Arab League and a graduate of one of Injaz Egypt’s programs at that time.

Sharara is also a “Young Global Shaper”, which is a network of young people (under 30 years of age) who are exceptional in their potential, achievements and drive from all over the world. The Young Global Shaper Community was initiated by the World Economic Forum. He also serves on the board of multiple organisations supporting entrepreneurship and innovation in Egypt and the Middle East, which includes TIEC (Egyptian Government Technology, Innovation and Entrepreneurship Center ).

His efforts were acknowledged in more than 250 local and international media and he was selected as Egypt’s top influential due to the RiseUp Summit 2015 impact on the regional entrepreneurship ecosystem.

Some of the media are:

re:publica 2016 – Stopping the Brain Drain in Developing Countries through Entrepreneurship 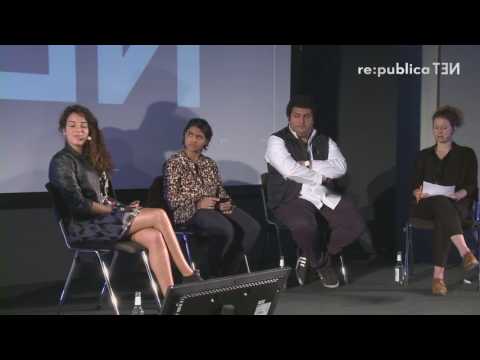 re:publica 2016
Stopping the Brain Drain in Developing Countries through Entrepreneurship